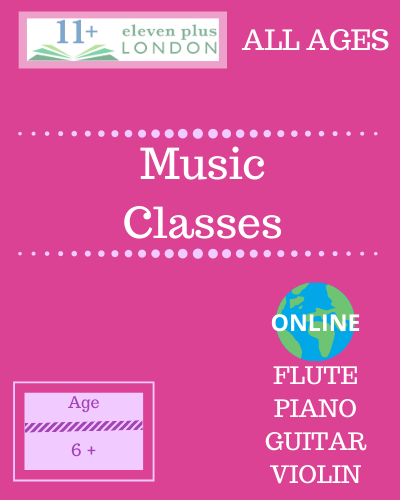 Be taught your chosen musical instrument anywhere at anytime. Our hand picked music teachers offer exceptional one to one lessons in theory and practical applications in a broad range of instruments including flute, piano, violin, guitar and much more. Playing a musical instrument brings a wealth of benefit – take a look at our selection […]

Be taught your chosen musical instrument anywhere at anytime. Our hand picked music teachers offer exceptional one to one lessons in theory and practical applications in a broad range of instruments including flute, piano, violin, guitar and much more. Playing a musical instrument brings a wealth of benefit – take a look at our selection of tutors’ profiles below:

“Elizabeth studied a BMus(Hons) degree at Birmingham Conservatoire and and MMus degree and FTCL diploma at Trinity Laban College of Music and Dance. She studied with Anna Pope, Robert Winn and Paul Edmund Davies. Whilst completing her studies she was awarded the Denne Gilkes Award and Colin Blythe Chamber Music Award. Elizabeth now freelances throughout the UK and has performed at venues including St John’s Smith Square, Regents Hall, Albert Hall and Birmingham Symphony Hall.

Her recent solo performances include giving a recital as part of the Trinity College of London Honorary Awards ceremony in 2019 and a performance and the National Choral Competition at Royal Festival Hall. Elizabeth is also a well renowned teacher having worked with the Lancashire and Birmingham Music Service, Birmingham Junior Conservatoire and Flutewise Charity. She was also the founder of the flute workshops ‘Little Flutes’ and currently teaches at the University of Chichester.”

Nedelina is a London based Bulgarian classical guitar performer and teacher. She is passionate about presenting a new musical view through her guitar performances, making the audience experience music on a sublime level by presenting each sound as if it was a feeling or a place. She is interested in presenting unusual, new or less played classical guitar pieces in order to help the guitar repertoire expand and develop. Nedelina is constantly curious and alert about the sounds surrounding us and she explores this by taking part in various collaborative art and music projects. Nedelina’s wish is to contribute to the classical guitar world and develop the way we understand and experience music.

Nedelina has 6 years of teaching experience with students from age 4 to 65 in guitar, piano and ukulele, and preparing them for Trinity and ABRSM exams. Thus far, her students have achieved distinctions in multiple graded exams, including gaining admission into the Junior Trinity programme. In addition to individual teaching, she has designed and created original teaching materials, including an instrumental guitar book for ensemble playing. As a current music teaching assistant and guitar tutor, she organises, manages and provides classroom music lessons to over 80 students from various backgrounds.

Born in Hampshire, Emma is a freelance Clarinettist and a recent graduate of Trinity Laban Conservatoire of Music and Dance. Emma is an experienced orchestral musician, playing with the Trinity Laban Symphony Orchestra and Side by side Orchestra – alongside professionals from the Philharmonia and other UK orchestras. She has had the opportunity to work with some fantastic conductors such as Ewa Strusinska and Andre De Ridder.

Since the beginning of her studies at at Trinity Laban, Emma has been involved in various teaching workshops with the Animate Orchestra, and performances at the Tate exchange in February 2018 and 2020, helping young people push the boundaries of classical performance and allowing them to grow in confidence in their playing. Emma is also a peripatetic Clarinet teacher at London Christian School in Borough. 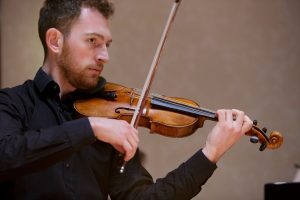 Ben Richardson is London based Violinist, who recently graduated from Trinity Laban Conservatoire of Music and Dance under Mayumi Fujikawa. He is currently studying a Postgraduate Diploma under Lana Trotovsek, kindly sponsored by the Peter Harris Trust, Trinity College London, the Henry Wood Accommodation Trust and the Blue Coat Foundation.

Ben is established in solo and chamber work, receiving many awards including the John Thompson String Ensemble Prize, Byram Jeejeebhoy Prize for Violin, Ben Barnard Music competition award and is in recipient of the Philip Carne Mentorship Scheme for chamber music. He is also established as an orchestral musician who has worked alongside musicians from the London Philharmonic Orchestra, London Symphony Orchestra and with the BBC Concert orchestra.

Maya-Leigh Rosenwasser is a performer, composer and improviser who was recently a recipient of the Leverhulme Trust Scholarship to study on the MMus Contemporary Piano Performance course at Trinity Laban Conservatoire of Music and Dance. Under the tutelage of Rolf Hind and Douglas Finch, she specialised in performing and composing new works for piano (solo and chamber), live electronics and multi-disciplinary ensembles.

Maya-Leigh has participated in numerous events across Europe such as Greyfriarks Kirk (Edinburgh as part of Equinox) Glasgow (Royal Conservatoire of Scotland’s Piano Festival 2016 – 2018), London (St Bartholomew’s Chamber Orchestra), Hungary (Bozsok Music Festival) and the Steinway Gallery in Cyprus, where she was featured on national radio.

Who is it for?

Our music teachers are adept at teaching children and adults, so these music classes are ideal for anyone at any stage of their musical journey.

Different studies have proven how learning a musical instrument can help us both mentally and academically at any age! Below are a number of great reasons to learn music:

Music has been proven to be a stress relieving tool that enhances concentration. Every new note learnt is also a personal achievement and will improve confidence.

Several of the studies reviewed in a 2011 paper by Finnish music and education researcher Riia Milovanov and her colleagues, showed that mastery of more than one language as well as mastery of music involves higher levels of executive control. Execute control are mechanisms responsible attention shifts, working memory, reasoning, and switching between tasks. Moreover, several studies have shown that both bilingualism and musical training appear to protect people against the onset of dementia and other cognitive decline in later life.

Some studies have showed that musical training correlates with better language-learning skills and maths skills. Learners with a musical background were found to be better at pronouncing the sounds of a second language and at perceiving the relevant contrasts between sounds in that new language.

You can schedule our online lessons with our tutors at a convenient day and time suitable for you. Our tutors are available 7 days a week and can be booked in for just half an hour a week up to as often as you would like. Location is also not an issue as our experienced music tutors will be utilising reputable platforms such as Zoom or Google Meet to deliver classes.

Our music tutors are exceptionally skilled in their instruments and in guiding students to become extraordinary players. Each tutor has been handpicked carefully and have accumulated a huge number of success stories.

Playing a music instrument compliments learning in many ways and, as part of our holistic approach to education and tuition, we champion the idea of integrating this skilled art-form into the lives of as many of our students as possible.

Co-founder Andrew discusses the benefits of music and languages as ideal hobbies to improve learning and support developing young minds:

We use cookies to ensure that we give you the best experience on our website. If you continue to use this site we will assume that you are happy with it.